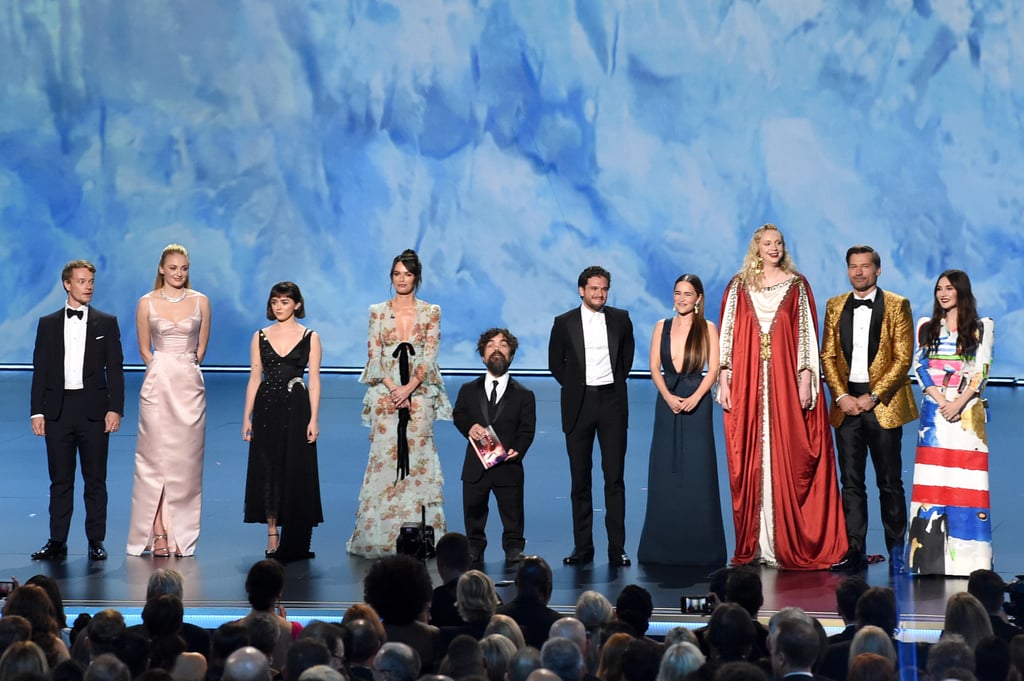 The Game of Thrones Cast at the 2019 Emmys

Since Game of Thrones is a fantasy drama, it's only right that the cast went for fantasy and drama with their looks at the Emmys on Sunday. The costars appeared at the LA event for one last Emmys hoorah following the show's eighth and final season in April. The stars were dressed to the nines, especially Emilia Clarke, who wore a navy blue gown with a plunging neckline, and Gwendoline Christie, who rocked a renaissance-esque red and white dress with bronze embroidery. And if those looks didn't make your jaw drop, perhaps Sophie Turner's light pink ensemble and Maisie Williams' ornamental outfit did.

Inside the Microsoft Theatre venue, Sophie and Kit Harington had an adorable reunion, greeting each other with smiles and a warm hug. "You look so handsome!" Sophie says in a video captured by The Hollywood Reporter writer Scott Feinberg. Too cute!

Going into the show, the cast already had something to celebrate. At the Creative Arts Emmys on Sept. 15, Game of Thrones nabbed 10 awards, including honors for special visual effects, as well as score, title design, and stunt coordination. At Sunday's event, the series received a record-breaking amount of nods, and the actors — some of whom submitted themselves for an award nomination — were recognized for their work over the past eight years. (Peter Dinklage later took home a trophy, as did the show in the best drama category.) Their watch might have ended, but their impact will last through even the coldest of winters. Read ahead to see more pictures of the cast at the Emmys!