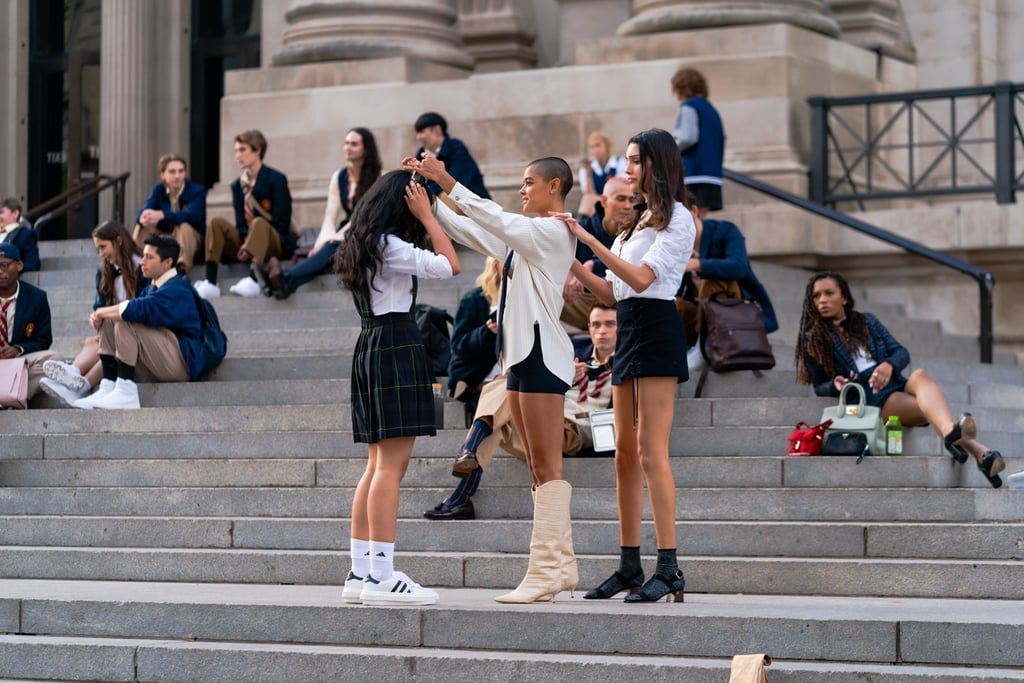 Hey, Upper East Siders, we have some exciting news for you: HBO Max's anticipated Gossip Girl reboot is finally underway. On Nov. 10, the cast — Evan Mock, Emily Alyn Lind, Thomas Doherty, Eli Brown, Jordan Alexander, Zion Moreno, Savannah Lee Smith, Whitney Peak, Tavi Gevinson, and Adam Chanler-Berat — was spotted filming in NYC, and the photos will make fans of the original series completely nostalgic. Not only are they wearing Constance Billard and St. Jude's school uniforms, but they're sitting on the steps of the Metropolitan Museum of Art. I don't know about you, but the photos are raising so many questions. Who are these new students? What's their story? And most importantly: who is the new Queen Bee?

So far, details about the new show and the characters have been kept under wraps. Although, being a big fan of the original, that didn't stop me from analysing each and every set photo. One group shot shows the cast sitting and laughing on the steps, while another telling photo shows Jordan Alexander and Zion Moreno putting a headband on Whitney Peak. Perhaps they're crowning the new Queen of Constance? Read ahead for even more theories as you get pumped for the reboot, which is expected to drop sometime in 2021.

Related:
Gossip Girl: Where Are the Stars Now?
Previous Next Start Slideshow
Gossip GirlTV
Around The Web