If you're one of the hardcore fans still waiting for the oft-pushed-back film adaptation of Wicked, these TikTok videos will either thrill you or cause an emotional spiral, we're not sure. On Wednesday, Kristin Chenoweth, Glinda extraordinaire, posted a two-part video for her fans that featured her singing a new version of the musical beloved song, "Popular," inspired by Vice President Kamala Harris.

Not only does Chenoweth school her watchers on the proper way to pronounce Harris's name — "Think of Camelot!" — but she also sings the former senator's praises, drawing on her career as a prosecutor and her intention to be the perfect second to President Joe Biden. Honestly, we're just awed that she fit all that information in two videos! Glinda would definitely be proud.

Watch part one of "Popular" the Kamala Harris Edition above and check out part two below! 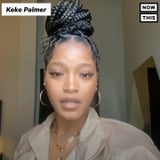 Nails
I Tried the TikTok French Manicure Stamp Hack, and OMG, It Actually Is as Easy as It Looks
by Jessica Harrington 4 days ago

Coronavirus
Meet the TikTok-Favourite Met Gala Dress . . . That Never Made it to the Red Carpet
by Yerin Kim 5 days ago