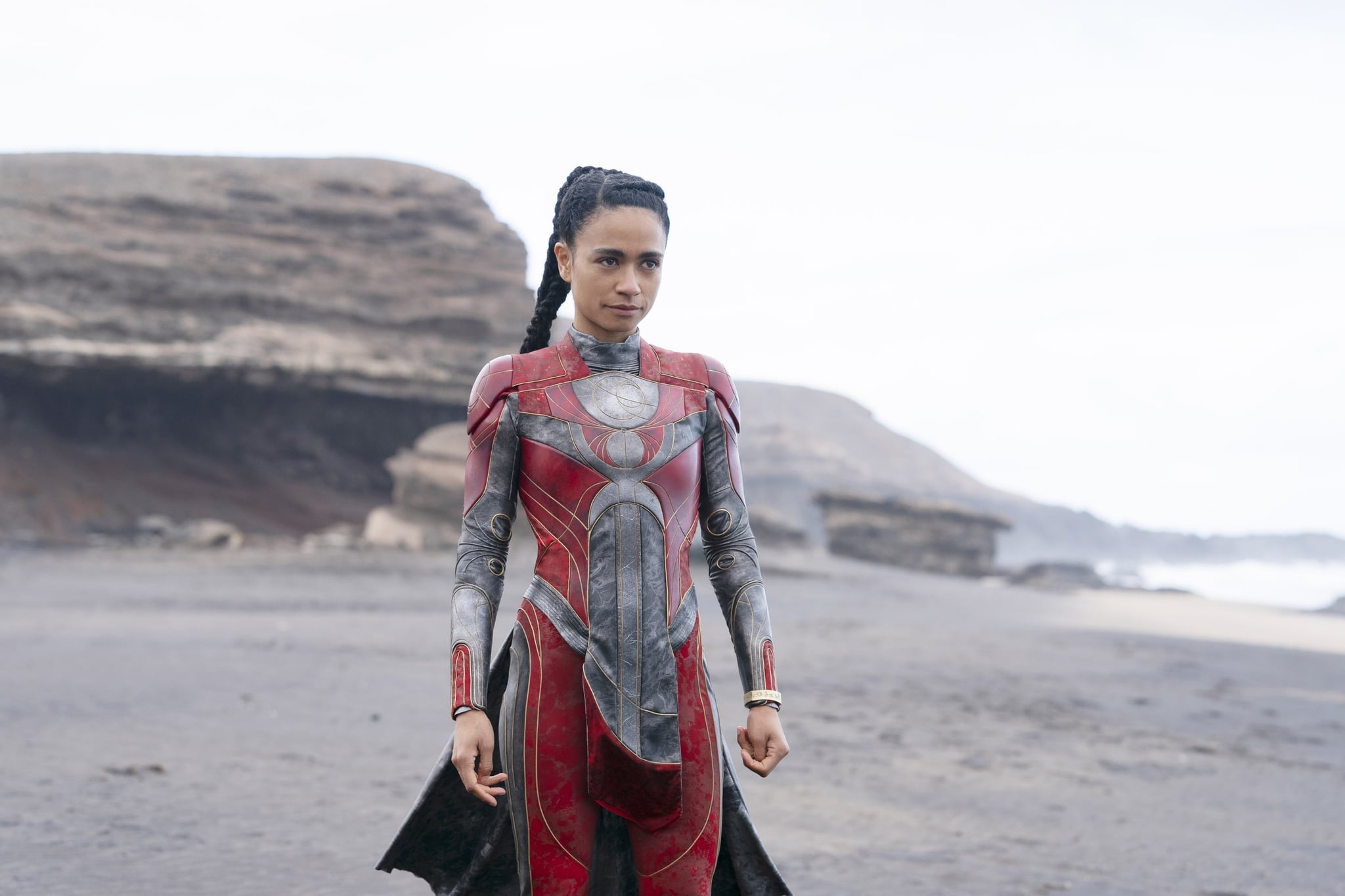 If you thought the Avengers were incredibly powerful, wait until you meet Marvel's Eternals! The immortal, million-year-old team of superpowered beings are making their big-screen debut this year, featuring a diverse group of heroes who all bring something unique to the team. One of the more groundbreaking among them is Makkari (portrayed by Lauren Ridloff in the movie), the fastest team member — and Marvel's first onscreen deaf superhero. Here's what you should know about this vital character's history before she's taken from the pages of Marvel comics to a big screen near you.

In the comics, Makkari is one of the Eternals, beings created by the Celestials a million years ago who've watched over humanity since their creation. He (yes, he's a man in the comics, but more on that later) specialises in technology and engineering, and he has a particular interest in speed and transportation. Because of this, he's often mistaken throughout human history for gods such as Hermes (the Greek god of speed) and Mercury (the god of communication, travellers, and boundaries).

Like all the Eternals, Makkari's physical form is totally under his control and nearly indestructible by normal means. He is super strong, has super stamina, can fly and teleport, can create illusions, and can manipulate energy, among other powers. That being said, the superpower most strongly associated with Makkari is speed. Throughout his immortal life, he's spent a considerable amount of time and effort on improving and harnessing his speed. At one point, his pursuit of increasing his speed temporarily costs him his other powers, such as strength and flight.

Makkari does eventually transform into a woman in the comics, though. When Makkari is killed, his off-and-on lover, Sersi, uses her powers to transform into a perfect replica of Makkari and then takes over his consciousness, restoring his connection with the Dreaming Celestial. Later, after the Dreaming Celestial dies, Makkari transforms into a woman and tries to resurrect the Celestial, but she fails and loses her telepathy, hearing, and speech in the process.

What Is Makkari's Role in Eternals?

Much of Makkari's specific role in the onscreen version of Eternals is still being kept quiet, as with most Marvel movies. However, the character descriptions that were part of the movie's marketing campaign reveal a few details. "Makkari is the fastest woman in the universe. She uses her cosmically powered super-speed to scout planets for the Eternals, and as the only deaf Eternal, the sonic boom that accompanies her cosmic running does not affect her," reads one such description, as reported by ComicBook.

Who Plays Makkari in Eternals?

In the movie version of Eternals, Ridloff (who's part of the Deaf community like her character) plays Makkari. According to Ridloff, Makkari's deafness is an asset for her and her team.

"Let's just say Makkari would not be as fast as she is if it wasn't for her Deafness," Ridloff told the Los Angeles Times. Ridloff worked with director Chloé Zhao and other creative team members to ensure a well-rounded, authentic portrayal of the character. "I kept wanting to check in about how we would actually reveal my Deafness in the storyline, and we finally got to a point where I felt like we could actually show Makkari as having a Deaf benefit or a Deaf gain. That's a word that we use within the community to show the idea that being Deaf can actually be a good thing too, and we show that in the movie."

There's tons of lore from the comics that the Eternals movie can dive into when it comes to Makkari, so we can't wait to see where they take her character in the MCU!