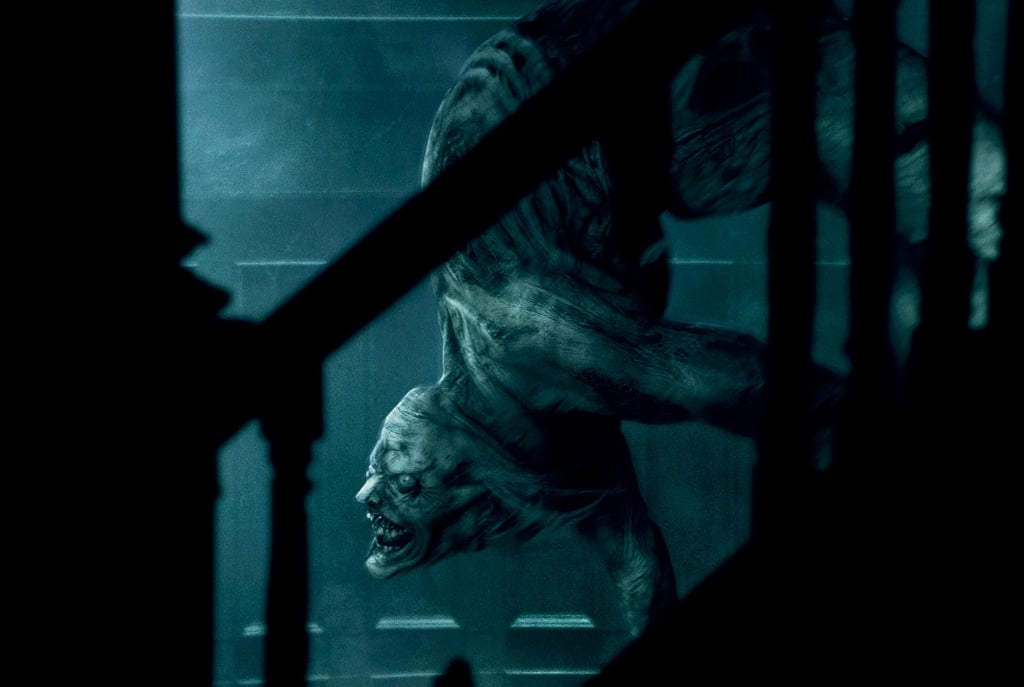 The story it's based on: "Me-Tie-Dough-Ty-Walker"

How scary it actually is: What does "Me-Tie-Dough-Ty-Walker" mean? I don't know. But trust that if I ever hear it again, I'll enter into the nearest witness protection program. That is how scary this creature is. The corpse is your usual freaky zombie fare, but the Jangly Man (as he's known in the film) is a lanky, humanoid jigsaw puzzle of horror.

While no characters in the original books go by the Jangly Man moniker, this monster is a take on the fourth story in the first book, "Me-Tie-Dough-Ty-Walker," which is based on an American folktale. As the story goes, a boy agrees to stay overnight in a haunted house despite legends of a cursed chimney, and brings his dog with him. At midnight, he hears a voice call out "Me tie dough-ty walker," and his dog responds in a similarly creepy language. Eventually a bloody head rolls down the chimney and a tragedy occurs.

In the film, the Jangly Man appears first by only his dismembered, grey, veiny head, which rolls down a chimney in the police station much to the disbelieving surprise of the town's a**hole deputy. Soon the rest of the creature's body plops down, linking together into one powerful freakshow. It promptly snaps the deputy's neck and goes after Ramón, chasing him all over town. (Perhaps "chasing" isn't the right word — inhumanly skittering is more accurate.)

The one thing about this monster that sets it apart from the corpse and the Pale Lady is that the way the creature kills its victims seems final; Augie and Chuckie appear to have been sucked into some parallel universe, but the deputy is straight-up murdered on the spot. There's no hope for him to return the way there is for the others (at least if what Stella says at the conclusion of the film is to be trusted). Facing off with the Jangly Man has real consequences, which makes him scarier on a whole other level.

Netflix
Shocked by The Old Guard's Ending? Here's a Breakdown of That Final Twist
by Stacey Nguyen 9 hours ago