The folks over in CBC's video department deserve a booming round of applause, a generous raise, and basically every other form of praise possible. The Canadian streaming service routinely shares hysterical Schitt's Creek montages on its social media accounts, and the latest creation is quite the Grammy-worthy masterpiece. It's essentially an abbreviated music video for a song named after the tiny fictional town, with lyrics comprised of one-liners from the sitcom, occasional rhyming, and a catchy background beat that'll be stuck in your head all week. As the first few shots roll, you're notified that the track is by "The Roses" and was produced by "Rose Video Records," naturally.

The video is a welcome walk down memory lane for Schitt's Creek fans. It features footage from some of the show's best scenes, including Johnny's awkward AF speech at Carl's funeral, Moira's hilarious tourism video from season six, David's famous "happy ending" massage, and Alexis revealing her over-the-top professional title of "freelance brand invigourator." Watch the entire iconic clip above, and if you're still in the mood for more Schitt's Creek entertainment after, this supercut of David repeatedly saying "oh my god" should do the trick. 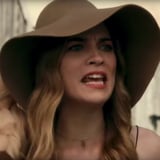