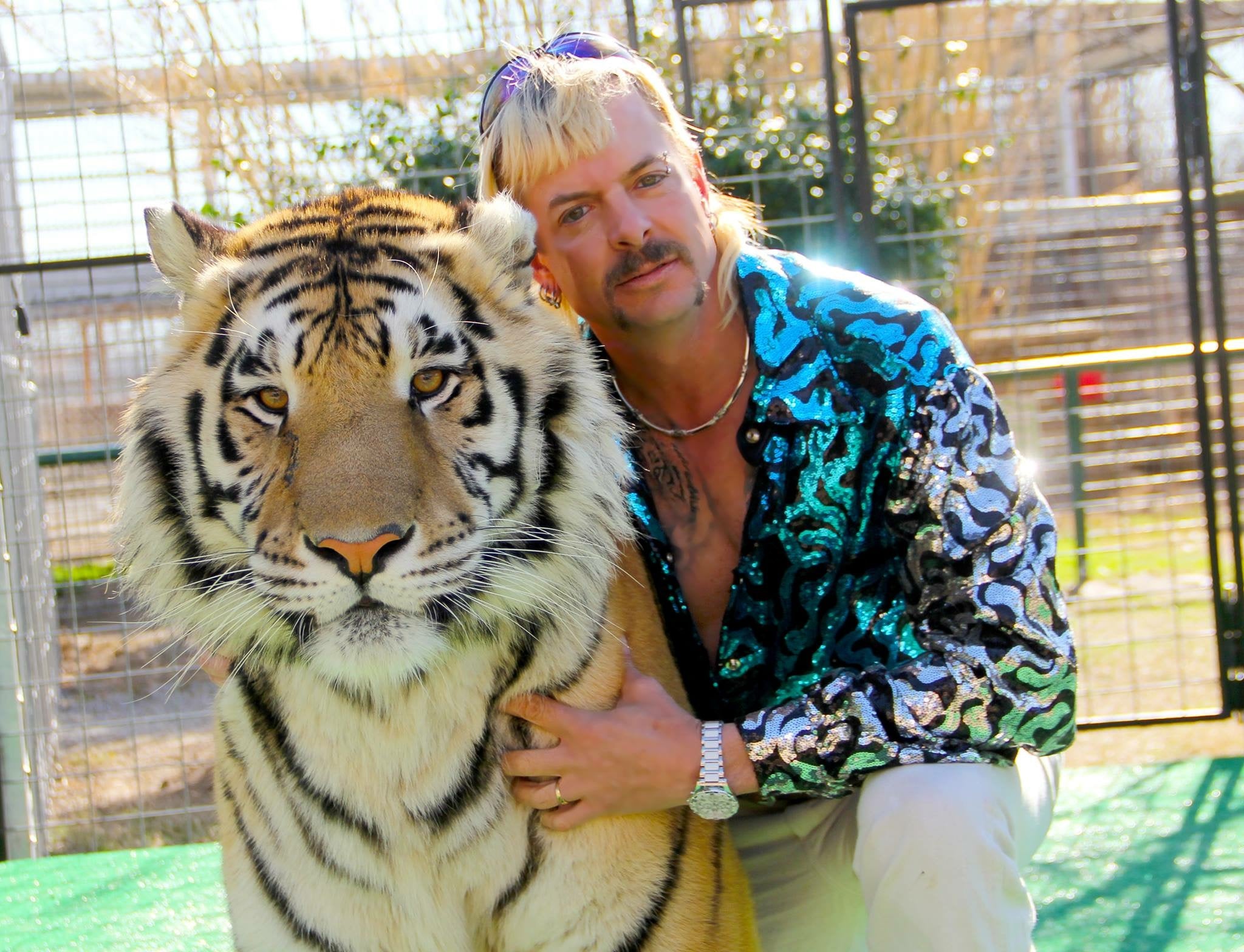 Editor's Note: Be aware that this story contains descriptions of animal abuse.

In the upcoming limited series Tiger King, Netflix fuses its popular true-crime and wildlife documentary genres, following the exploits of a colourful zoo owner. The project shines a spotlight on the personality Joe Exotic, aka Joseph Maldonado-Passage, a gay, gun-wielding polygamist who bred big cats and was convicted of hiring people to kill his most outspoken critic.

As wild as this may all sound, it's entirely based on a true story.

Maldonado-Passage was born in rural Kansas as Joseph Schreibvogel. Early in his life, he moved to Texas, where he became a police officer in Eastvale. His younger years were just as turbulent as his later ones. One of his siblings had outed him to his father, who made him shake his hand and promise not to attend his funeral. After a suicide attempt, Maldonado-Passage moved to Florida and worked at a pet shop, where he developed an interest in animals.

In 1987, he opened the doors to the contentious Garold Wayne Exotic Animal Memorial Park in Wynnewood, OK, honouring his late brother. Most of his earliest animals were donations, including deer, buffalo, and tigers. Not long after, he started breeding the animals for profit. By the mid-2000s, his zoo housed over 1,000 animals. In addition to his animal collection, most people knew him for his blond mullet, edgy YouTube channel (JoeExoticTV), and two husbands. He also tinkered in a political career as a Libertarian, running for Oklahoma governor in 2018 as well as for president in 2016.

Many animal activists took issue with Memorial Park, citing instances of abuse. Maldonado-Passage, who called himself The Tiger King, had several run-ins with the law, including the time he shot at least six emus that escaped onto the freeway. In 2006, he was fined $25,000 for a huge list of violations, including the failure to provide adequate veterinary care for his animals and not removing waste from cages. PETA came after him as well, exposing the animals' irregular feeding and abuse, the latter of which included a tiger being hit with the butt of a rifle.

Maldonado-Passage later became involved in a landmark lawsuit with Big Cat Rescue, a wildlife sanctuary in Tampa, FL, run by Carole Baskin, who was quoted in an article for criticizing the conditions of his zoo. He started using her logos to promote his show. Her company sued him in 2011 and won $1 million in court in 2013.

Not long after, Maldonado-Passage wed his husbands, Travis Maldonado and John Finlay, in a three-person ceremony. But trouble soon came his way; Maldonado-Passage filed for bankruptcy and put the zoo in the hands of one Jeff Lowe. He started virulently harassing Baskin on social media. Additionally, he became estranged from Finlay soon after these events.

In 2017, Maldonado-Passage's husband Maldonado died from an accidental gunshot wound to the head. Not long after, Maldonado-Passage married Dillon Passage. The same year, an FBI investigation found that Maldonado-Passage had promised a hitman $3,000 for killing Baskin, along with thousands more dollars after her death. Maldonado-Passage later unwittingly promised another sum to an undercover FBI agent in December 2017. In addition to charges of hiring two people to kill Baskin, Maldonado-Passage also violated the Endangered Species Act by killing five tigers in October 2017 because he needed "empty cages." He also received eight counts of violating the Lacey Act by falsifying wildlife records for interstate transactions.

Maldonado-Passage currently serves a 22-year prison sentence for his crimes. He maintains that Lowe set him up to take complete ownership of the zoo, accusing him of everything from drug use to sex trafficking.

Tiger King will be available to stream on Netflix on March 20.