Jean Paul Gaultier is famous for pushing the boundaries of androgyny and this collection was no exception. This line was heavily inspired by the typically masculine toreador, which he cleverly made feminine with patches of sheer fabric along the leg. He told the International Herald Tribune, "I've taken the symbol of the macho identity and grafted really feminine elements onto it. It's a sort of androgenization." 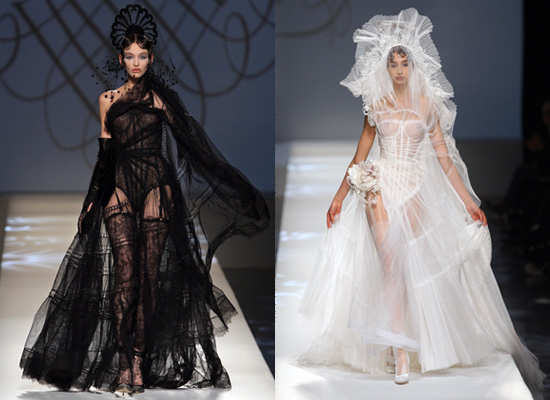 For the rest of my thoughts on the show, just read more.

Indeed there was a lot of sheer in the collection as Gaultier's cheeky playfulness shone through. There was an undeniable '80s vibe with strong shoulders on power suits and Madonna style bodice. The '80s influence was confirmed when ex-Chanel model Ines de la Fressange ended the show. The 51 year old said it was a one-off occasion as she felt nervous being "surrounded by all those sexy little things."