One thing I always admire about Henry Holland's designs is that he goes with a theme and sticks to it. Last season he went with a distinctly '90s theme, for Autumn '08 he went tartan and for Autumn '09 he looked no further than a pantone colour chart! The models were dressed head to toe in varying shades of one colour as texture was injected using a mix of fabrics. 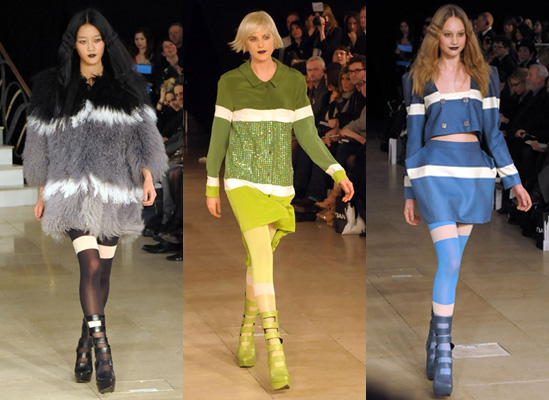 This collection was Holland's most grown-up so far with boxy jackets, tailored trousers and strapless dresses. Subtle pleats, square buttons and rigid necklines highlighted his attention to detail. The show-stopper pieces was a big, black and grey fluffy jacket which is sure to be popular on the London party scene.

The show saw Agyness Deyn's only appearance at the London fashion showcase as she flew in from NY, she never lets down her best friend Henry! She attended the aftershow party with Henry too, still sporting his designs. She commented, "I wouldn't miss this for the world. Henry's shows are the first thing in my diary." Awwh!