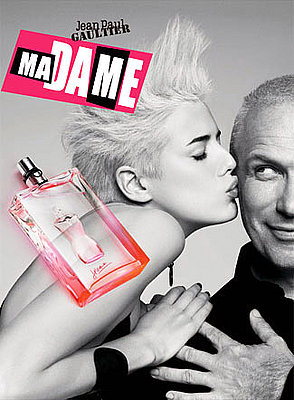 Seems that model du jour Agyness Deyn now has another advertising campaign under her belt as the face of Jean Paul Gaultier's new fragrance Ma Dame. Agyness was in Paris this week to celebrate with BFF Henry Holland, DJ's ODO 7, Miss Kitten and The Missshapes.

Gaultier described how he imagined Ma Dame and it fits Agyness pretty well. He described his ultimate Ma Dame woman as cheeky, distinctive and a girl who breaks all the rules!

Francis Kurkdjian, the perfumier who helped create the scent told Elle, "There is a great deal of strength and a great deal of softness in the fragrance. The same could be said of girls today."

The perfume launches exclusively on the 17th August at Harrods but will be available nationwide from 1st September.