Just a few days ahead of the latest Alexander McQueen show in Paris, The Sunday Times is reporting that Kate Middleton's wedding dress will be created by chief designer Sarah Burton. The news has already been denied by a spokesperson for Alexander McQueen saying, "This is not true." However, usual practice for the designers of royal wedding dresses is to be sworn to secrecy by the palace. 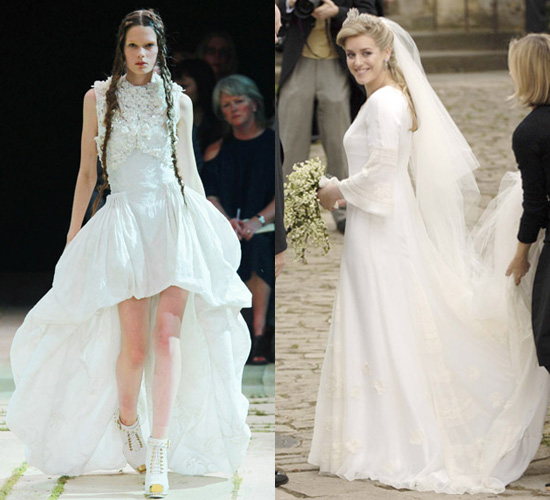 Clarence House also said, "We're not commenting on the specific designer for the dress because Catherine Middleton wishes to keep the designer a secret until the wedding day." The Times says that Kate was impressed by a dress which Laura Parker Bowles wore on her wedding day in 2006 (pictured) which Burton designed.

Burton took over the house of McQueen last year after his untimely death in February. McQueen was rebellious in his views towards the royal family. He was awarded a CBE in 2003, although later admitted that he only accepted it for his Mother. He explained, "I've said a lot of stuff about the Queen in the past – she sits on her arse and she gets paid an awful lot of money for it." Previous names who have been rumoured to design Kate's dress include Bruce Oldfield and Alice Temperley.