American Apparel is not a brand that shies away from controversy. There have been bottomless tights (and I don't mean footless) and endless revealing ad campaigns, but now it has been announced that the store has gone one step too far resulting in the banning of one of their ads. The UK advertising watchdog has blocked a campaign which it deemed inappropriate as it appeared to feature an under-16 year old girl in a series of images that implied she was "stripping off for an amateur-style photo shoot". 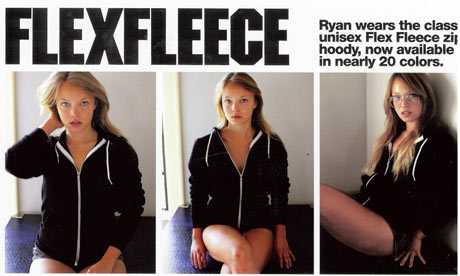 The Advertising Standards Authority received a complaint which argued the campaign was offensive because it seemed to show a model who is "young and vulnerable and could be seen to sexualise a child". American Apparel hit back explaining that the 23 year old model was posing in a hoodie which is "soft to the touch" and could therefore be worn next to bare skin. The company also argued that it did not portray the model as a "sex object". Three of the six images from the campaign are shown above, do you think American Apparel need to tone down their advertising?