There are only a few weeks to go until London Fashion Week commences for another season, but names are still being added to the schedule. We have already heard about the return of Burberry Prorsum, Pringle of Scotland and Matthew Williamson, and yesterday more design houses joined the party as both Sass & Bide and Antonio Berardi announced their plans. 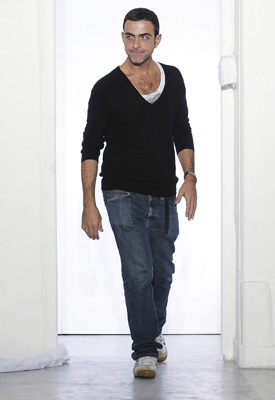 Today, Antonio (who is perhaps most famous for being popular with Victoria Beckham and Gwyneth Paltrow) has spoken out about his decision to join the 25th anniversary celebrations. He usually shows in Milan, but explained to Vogue, "The great thing about London is just to soak up the atmosphere which has always been electric. Since I began my career in London, and London was magnanimous enough to support me back then, it seems only right that I can repay the favour which is long overdue."

He also added that he has connections in the capital. "My stylist Sophia Neophitou [from 10 Magazine] is based there, and though it's a big decision, it feels right. Luckily I've got support from Peroni who are making a London show possible."

For now, Antonio is only committing to this season, but maybe we can convince him to stay! "I am a bit of a traveller, having had shows in London, Paris, Milan and New York with my diffusion line. Who knows where next season will take me? But for now I'm very happy to be coming home."