Christophe Decarnin stuck with a tried and tested approach for his Autumn 2009 line which was shown at Paris Fashion Week yesterday. Working with his by-now signature rock'n'roll glam look, this collection included uber-short minis, body con shapes and a fair amount of sequins. He also continued the penchant for exaggerated shoulders, in fact, they were so extreme that two models nearly became gridlocked on the catwalk! There was a very familiar feel to the garments which are sure to attract party girls all over the globe. 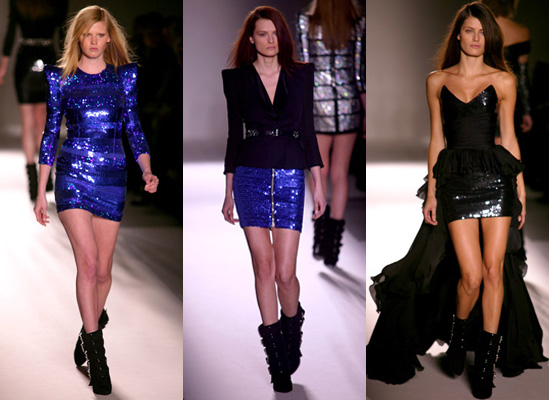 Decarnin added sex appeal with slit front harem pants, fetishistic boots and revealing gowns, which are likely to be a red carpet hit. He is widely celebrated for breathing life in to Balmain, but this season questions are raised as to whether he needs to move the brand on even more. Do you think it's a case of if it ain't broke – don't fix it, or are you bored of seeing the same rock chick looks?