Stella McCartney has taken her caring for all things natural to a new level as animals become the focus of her latest ad campaign! Last season Ryan McGinley shot Kate Moss as she posed in Stella's animal friendly designs and this season it's Disney's Bambi who is taking centre stage. Yep, that's right the animated deer and friends were added to the images in a studio after a woodland shoot in Worcestershire. Stella told WWD, “I’m a huge Bambi fan, and the film reminds me of my mum. The clothes in the campaign are looking quite fierce, and we wanted to contrast them with the innocence of Bambi.” Sigrid Agren poses in pieces from Stella's Autumn line in the campaign which will appear in September issues of magazines. 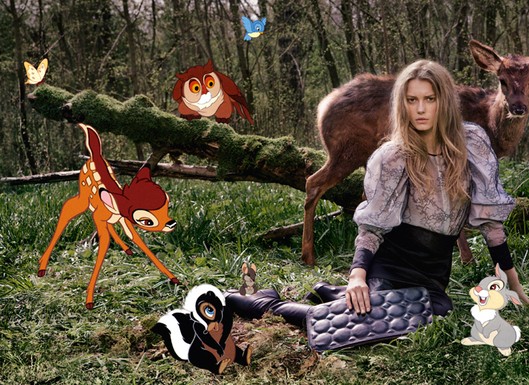