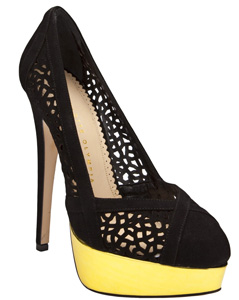 The British Fashion Council has just announced it's shortlist for a 2011 fashion award. It is given in conjunction with Vogue and is the UK equivalent of the CFDA /Vogue Fashion Fund which was this year awarded to Billy Reid. The shortlist for 2011 is Jonathan Saunders, Nicholas Kirkwood, Osman, Peter Pilotto, Richard Nicoll, Charlotte Olympia (who's shoes are pictured), Christopher Kane and E. Tautz.

The winning designer will be awarded £200,000 to support their business. The judging panel is chaired by Alexandra Shulman who commented, “It is very exciting to be in our second year of the fund and to be providing such tangible help to this extremely impressive shortlist of British designers." Last year, Erdem took home the accolade. The winner for 2011 will be announced in the March issue of British Vogue.