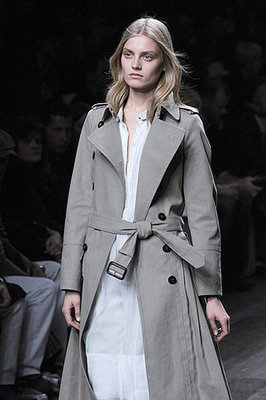 There is some very exciting news this morning if you're a fan of London Fashion Week. Burberry Prorsum have just announced plans to bring the label home for the Spring 2010 shows in September! The British brand normally shows in Milan, but as London celebrates 25 years as a fashion capital they have decided to show the next collection in the British capital.


"We are so excited to be showing during London Fashion Week and particularly to be part of its historic 25th anniversary. We are incredibly proud of our Britishness and this is really a wonderful opportunity to celebrate that in our home city."

This is a major boost for London which had to defend its place on the calendar last season as New York fashion week threatened to overlap. Burberry Prorsum will close the event on Tuesday 22nd September.

It's great to hear of big names returning to the capital as in recent years we've seen Temperley of London, Luella, and Vivienne Westwood bring their designs back to Blighty. It would be amazing to see other designers follow suit.