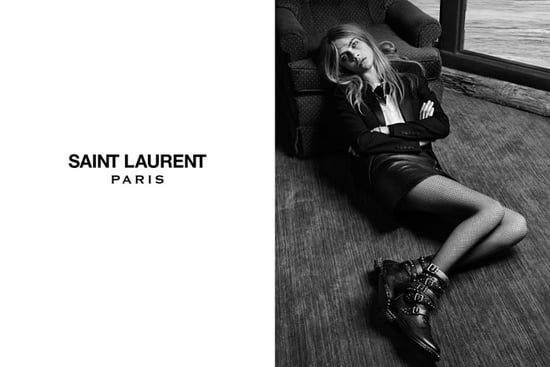 As if she wasn't everywhere already, Cara Delevingne is at it again. The British model is the new face of Saint Laurent Fall 2013, starring alongside DIIV band member Cole Smith in the just-released ad campaign. The full set of images, shot by Hedi Slimane, were released in the form of a three-minute video, and they mark Slimane's first Fall campaign for the brand since joining the fashion house in March 2012.

Set to a moody DIIV track, Delevingne and Smith showed off pieces from the Fall lineup while lounging in a house perched above the Pacific Ocean. With a star-print coat, floral minidresses, fishnets, and studded boots all making appearances in Slimane's California world, the grunge-inspired clothing came alive in a way that didn't necessarily translate — for some — when it was first sent down the runway in March. As for Delevingne? This isn't her first foray into Saint Laurent territory. She's currently the face of Yves Saint Laurent Beauté's Baby Doll mascara and she walked in the Fall 2013 show.

A look at the video and more campaign images, below.