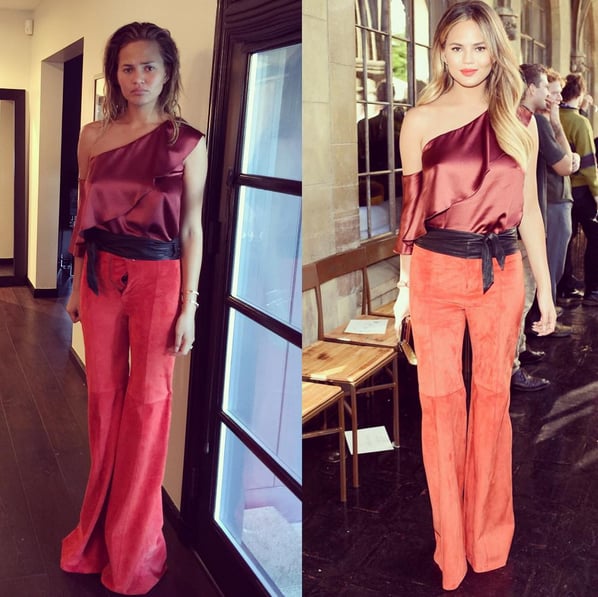 Chrissy Teigen Invented the "Crotch Patch," and Every Mum-to-Be Needs to Know About It

We had absolutely zero doubt that Chrissy Teigen would kill it in the maternity style department. But we didn't expect outfits this good. Not only did Chrissy mix two luxe fabrics when she stepped out with John Legend for the CFDA/Vogue Fund Fashion Show, but she also worked two shades of red and a trendy leather belt.

But that's not all — never could we be prepared for Chrissy Teigen's "crotch patch" styling trick, which she just revealed on Instagram. The star took her long, suede Iro flares to the tailor and had the extra fabric moved to the fly, in order to expand the waistline for her growing belly. "Tailors are a miraculous thing. The hem of my trousers became my crotch patch. #crotchpatch #belly thanks for the side by side, mom," Chrissy wrote.

Read on to see how well Chrissy pulled off her look — from her elegant Jill Stuart satin top to her fabulously altered trousers and gold Vita Fede jewels — and then share Chissy's brilliant idea with every mum-to-be you know. Trust us, they'll thank you for it.