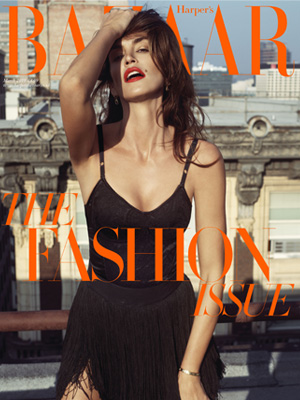 Harper's Bazaar is celebrating women for March 2010 as they dedicate the whole issue to the fairer sex. Cindy Crawford appears on the cover as shot by Cedric Buchet. Christopher Kane asked the question that we've all been thinking – is she a machine?

There is also a feature on strong female designers featuring Stella McCartney, Phoebe Philo and Hannah MacGibbon who are applauded by Donna Karan for their “dominance and strength”.

March will see the launch of Harper's support for Zainab Salbi's charity Women for Women International. They have teamed up with some top female designers (including Tamara Mellon, Sienna Miller and Alice Temperley) to create a line of t-shirts which will be sold via net-a-porter. The issue hits newsstands on 4th February. What do you think of Cindy's cover shoot?