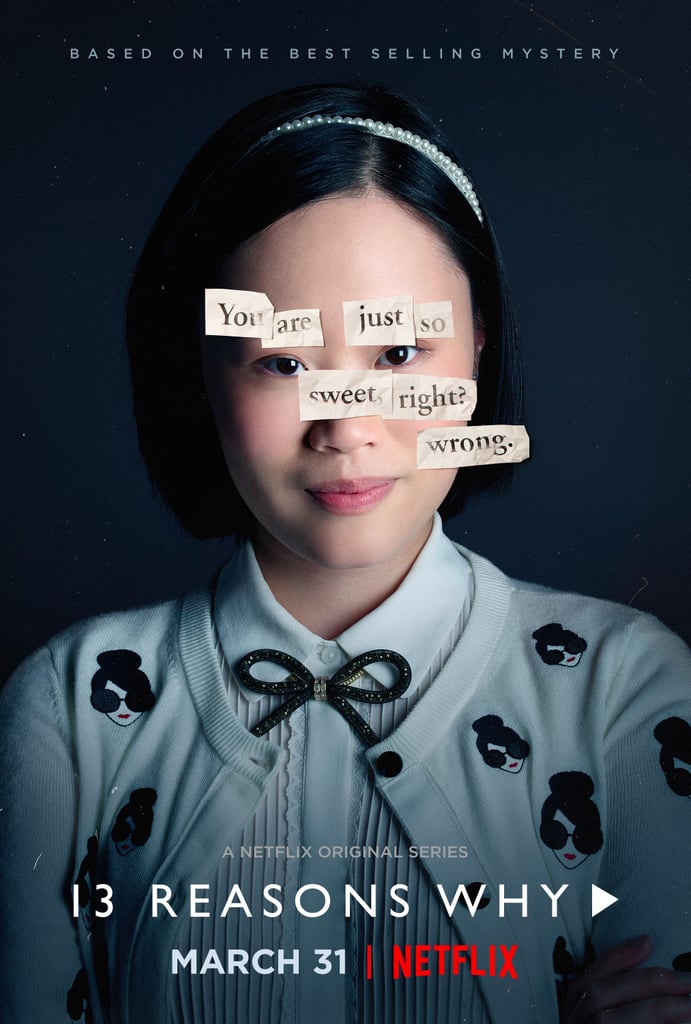 The Problem With Courtney's Clothes on 13 Reasons Why

Admittedly, I haven't fully binged my way through 13 Reasons Why yet, but it only took me two episodes to recognise the difference between Courtney Crimson, played by Michele Selene Ang, and the other students at Liberty High. Yes, many of them are troubled, especially following the suicide of their classmate, Hannah Baker. And they all have personal issues they're grappling with — Courtney included, who knows she is a lesbian, but refuses to come out since she's experienced judgement all her life for being the adopted daughter of two gay dads.

But from a superficial standpoint, Courtney looks very put together. She practically dresses like Charlotte from Sex and the City, wearing fashion cardigans, like Alice + Olivia's signature Ruthy design, over collared tops, accessorised with a thin pearl headband. The dress she wore for the school dance, a rose printed fit-and-flare with a bow at the waist, was similarly accessorised with a stand of pearls and matching drop earrings. Her wardrobe is highly sophisticated for a high school student. She wears pieces and consistently creates outfit combinations I wouldn't have dreamed of as a 16-year-old.

Courtney also owns Kate Spade New York's boombox satchel, interestingly enough, spotted in the scene where she scurries away from her dads sharing a somewhat romantic interaction at Monet's coffee shop, for the sake of hiding from her friend Clay Jensen. In that moment, I was distracted by her kitschy purse. Maybe that's how Courtney uses fashion: as a distraction. Her perfectly layered tops, complete with sparkly brooches or bows, are her armour. They are a public facade that hide who she really is. Fitting, then, that when Courtney finds herself getting drunk with Hannah, she begins to take off her clothes, then dares Hannah to do the same. It is only afterwards, when she's bare in her nude bra and jeans, that she's able to kiss her.

Hopefully one day, she'll be able to wear her heart on her sleeve, instead of just another bow or embellishment. But until then, there is a lot to be learned from Courtney and the way she masks her anxiety. While coming out as gay is different for everyone, Courtney's reliance on a uniform is not surprising. It helps her to blend in at school; it says "I'm the the sharp student who is always on her toes." It's not that we suspect Courtney doesn't truly like or appreciate the fashion she's wearing (who can resist a quirky clutch?), it's that Courtney likes the image her style helps her to portray more than the person she is — that is the real problem.