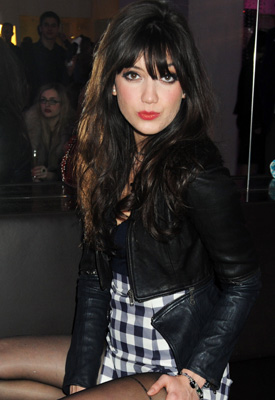 Daisy Lowe has had a busy start to 2010 with the launch of her collaboration with Swarvoski. She spoke to the Sunday Times Style magazine this weekend about how excited she was to be a part of it. She joked that she was so excited to be asked, “You recognise that I actually have a brain? Thank you!”

The model turns 21 later this month and has already worked on a Louis Vuitton campaign this month alongside much talked about model Lara Stone. Daisy was shocked to hear her referred to as "larger" commenting, "I felt like an elephant next to her. It’s ridiculous. She’s being hailed as this bigger girl, but she’s tiny.”

Although Daisy will be having a big party for her landmark birthday (the theme is Magical House of Fairy Tales) she has one strict rule – "No drugs allowed, basically. If you want to be at my party and you call yourself one of my good friends, then we’re just playing Twister, thanks." She experienced first hand the problems drugs can cause with her own Mother's battles and explained, "The older generation learnt what drugs can do to you, and we’ve learnt from them. We don’t need to experience it for ourselves, we don’t need to batter our bodies."

The model has recently returned to London after a brief stint in New York and has now bought a home in West London. She's incredibly proud to be British and even has a Union Jack flag in her home "In case I ever forget I’m back in England. It’s like — I really am here!"