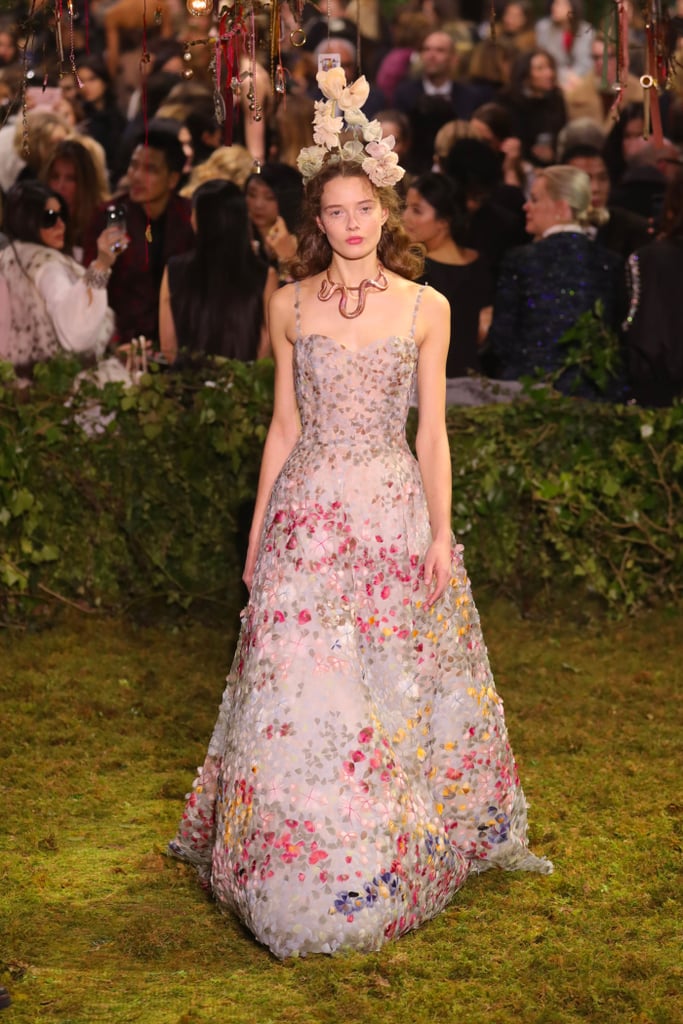 It's no wonder stars like Kirsten Dunst and Diane Kruger sat front row at the Dior show in Paris, every gown that hit the runway was a masterpiece fit for the red carpet. Industry leaders like Anna Wintour, Diane von Furstenberg, and Cathy Horyn were there too, all to see Maria Grazia Chiuri debut her first Haute Couture collection for the fashion house.

The reaction from the crowd was just as positive as it was months ago, when the Spring '17 ready-to-wear pieces sparked something of a revolution. Since now it seems like every girl has got her hands on the iconic "Feminist" tee, we can only imagine how many celebrities — Kirsten and Diane, but also Jennifer Lawrence, Natalie Portman, and Nicole Kidman — will show up at the Oscars in one of these looks.

The catwalk was transformed into a garden as models dragged their trains along a winding path decorated with lights. A lineup that began with sharply tailored evening suits quickly escalated into princess territory. Maria Grazia Chirui brought along the zodiac-inspired embroidery, polka-dot tulle material, and fit-and-flare silhouettes from her previous offering, but she added so much in the form of flowers, inspired by a quote from the late Christian Dior: "After women, flowers are the most divine of creations. They are so delicate and charming, but they must be used carefully."

Velvet panelled ballgowns adding plenty of glamour while appealing to the girls who like to remain dark and mysterious (they might accessorise with one of the butterfly face masks, created by Stephen Jones, or pull up one of the voluminous hoods). On the other hand, there were ivory midis and glittering, tiered skirts that went best with tall feathered head pieces. Read on to see what all the fuss is about when you re-watch the show, then find all the major moments you really shouldn't miss.