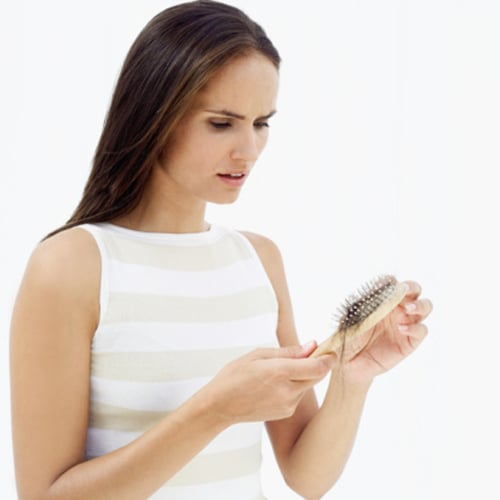 A new study from the American Society of Plastic Surgeons suggests that marital stress, smoking, and heavy drinking disproportionately affect women's hair loss. The study, conducted on 42 sets of female identical twins, found that the major predictor of female hair loss was divorce or widowhood, but that heavy drinking and smoking also contributed significantly. In contrast, the primary predictor for male hair loss is genetics, followed by smoking, sun exposure, and dandruff.

Female hair loss, then, would appear to be driven far more by physical and emotional stress than genes. Interestingly, we know that marital stress like divorce does have plenty of other negative effects for men, including shortened lifespans. So if you want a full head of hair well into old age, don't smoke, drink moderately, and stay single.

Source: Divorce, Smoking, and Alcohol Will All Make You Lose Your Hair

Hair
The Buzziest Haircut Trends For Autumn, According to the Experts
by Tori Crowther 31 minutes ago

Adam Driver
Adam Driver Takes Centaur Stage in a New Burberry Ad; the Internet Wants In on the Ride
by Kelsey Castañon 1 day ago

Hair
Here's How Long Your Box Braids Can Last, According to Their Size
by Danielle Jackson 1 day ago

Beauty at Home
I Tried Fenty Skin's New Body Scrub, and My Only Complaint Is That I Need Another Bottle
by Danielle Jackson 2 days ago