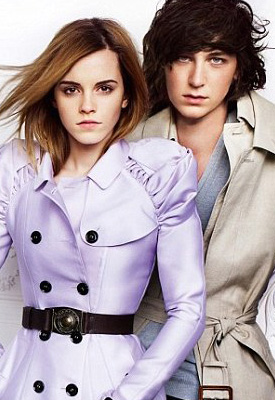 Photos emerged today of Emma Watson heading to the theatre with a new man. He has been identified as a fellow Burberry model from the Spring 2010 campaign.

George Craig is also the front man of band One Night Only which is how he caught the eye of Christopher Bailey.

Emma is back in the UK after a year studying in the US as she shoots the final scenes for Harry Potter. You guys voted Emma the best dressed at the National Movie Awards a few weeks ago.

I think they make a fab couple, who can argue with such good model looks? Would you like to see these two together more?