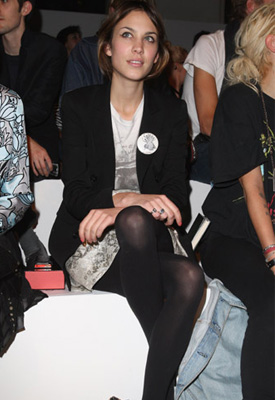 Last week, BellaSugar UK and I managed to catch up with style icon Alexa Chung at the Spring 2010 Twenty8Twelve show. Yesterday, her beauty secrets were revealed and now here is her quick chat with me about her favourite shows, her plans for the week and her Mulberry bag.

When we met she was wearing a The Smiths t-shirt and a silver jacquard mini skirt showing off her enviable pins. She sat in the front row next to Anna Wintour spurring rumours of a possible Vogue US appearance for the MTV presenter. Despite living in New York, she came to London for fashion week and attended many shows including Luella, Charles Anastase and Burberry Prorsum.

To hear about my chat with Alexa, just read more.

Sustainability
Klekt: The Sneaker Resale App That's Not Just For Sneakerheads
by Navi Ahluwalia 4 weeks ago