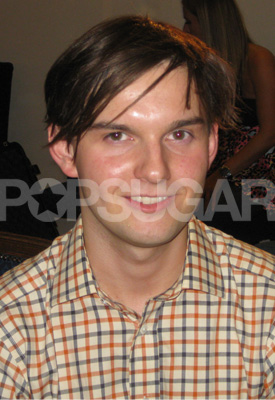 Last week at London Fashion Week, I was milling around backstage with BellaSugar UK who was getting the scoop on the hair looks for the William Tempest show when I bumped in to the man himself. I grabbed him for a quick chat about his latest collection and was pleasantly surprised to find him acting calm and looking very together.

The young designer missed out on Fashion Fringe in 2008, but did manage to bag himself a Vauxhall Fashion Scout sponsorship ensuring him a place on the schedule for three seasons. The Cheshire born designer studied at London College of Fashion and despite only graduating two years ago has already won critical acclaim from The Telegraph's Hilary Alexander and Vogue's Dolly Jones.

He spoke to me about Emma Watson, his Spring inspiration, and influential designers. To hear what he had to say, just read more.