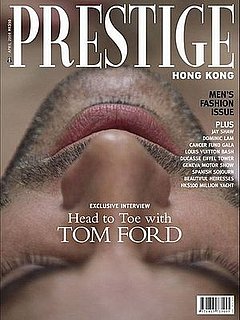 Tom Ford is on the cover of Hong Kong Prestige this month as he talks about Karl Lagerfeld, his brief retirement and how much he enjoys designing. There are a couple of great quotes including,


"The Asian man might seem more gentle to his American counterpart, but it's just a different aesthetic. It's like the English always seem gay to Americans."

He also talks about Barack Obama commenting, "I think he's a great looking guy but I think his suits don't fit him very well." Last month the magazine featured a controversial interview with Karl Lagerfeld.