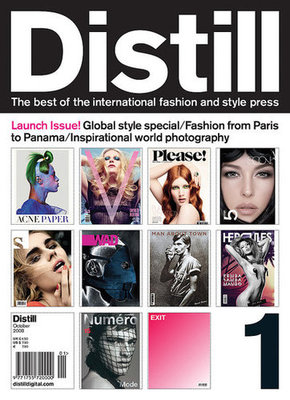 This week saw the launch of new digest magazine Distill. Back in June we revealed the plans for the publication, which is a collection of the best style press from around the world. It officially launched on Tuesday morning at London's trendy Sketch with a breakfast hosted by Editor in Chief Colin McDowell.

Colin called on his designer pal Giles Deacon for help with the launch as Giles stressed the importance of image, particularly within the creative industries.

Launching a magazine right now is being described as a 'bold move' but I think that the magazine is such a great idea, particularly if you love magazines but are on a budget. It could also introduce you to a magazine that you were not previously aware of. McDowell agrees announcing at the launch that, "It's such a brilliant idea, I was a little peeved I hadn't thought of it myself."