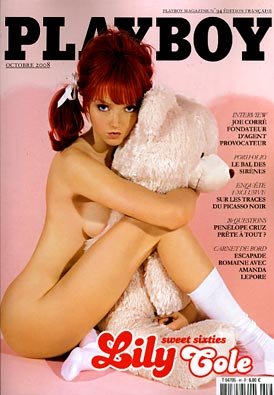 Back in July I revealed that British model Lily Cole would be appearing on the cover of French Playboy and now the cover has finally been revealed. Lily appeared on the catwalk for Agent Provocateur earlier this year looking racy in a pair of latex over the knee socks so I'm not surprised that Playboy decided to have her as their cover girl.

Fellow model Helena Christensen has also appeared on the sophisticated mens' mag cover. I love the '60s vibe that the Lily Cole cover has particularly with the Carry On style hair. The shoot entitled 'Sweet Lily' is said to be inspired by Serge Gainsbourg's Melody Nelson album which features a woman topless clutching a doll.

The magazine contains a 14 page editorial featuring interviews with Cole's industry colleagues and friends, including designer Jean Paul Gaultier and film director Terry Gilliam who is directing Cole in The Imaginarium of Dr. Parnassus.