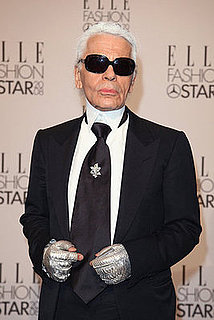 The world's interest in Karl Lagerfeld never seems to wane. The eccentric Paris based designer is often the subject of great amusement in the world of fashion due to his personal style and blunt comments. However, if Lagerfeld Confidential wasn't enough to satisfy your curiousity in one of the biggest names in fashion then you'll be pleased to hear about plans for another docu-film.

On French TV in October a fly-on-the-wall documentary will air about Lagerfeld promising to bare all. It's been directed by Thierry Demaizière and Alban Teurlai and will follow him about his daily life and offer an insight in to his tumultuous relationship with his Mother.

On the documentary Lagerfeld recalls a moment from his childhood. "When I asked her to tell me stories, she would say, 'Learn to read.' And when I wanted to tell her one, she would come back with: 'You may be four years old, but I am not.'"