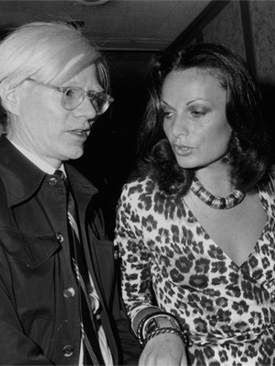 Diane von Furstenberg used to party with Andy Warhol at Studio 54 so I'm sure her latest plans will bring the memories flooding back. It was announced today that DVF would be collaborating The Andy Warhol Foundation on her resort 2008 and pre-spring 2009 collections.

The line of swimwear and cover-ups will feature Warhol's iconic prints. Speaking with WWD she explained, “Andy’s Pop colors and iconic images feel glamorous and right for beach.” She added that her and Warhol were 'contemporaries' and that he inspired her greatly during her early years of work.

This is a second boost for the foundation which also recently benefited from a collaboration between Interview magazine and Marc Jacobs. We can't wait to see DVF's final designs!