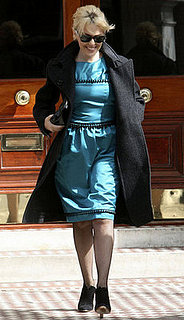 A Kylie Minogue World Tour is always going to involve a high level of glamour but throw in one of the most controversial fashion designers of all time and things start to get interesting! The Enfant Terrible of the fashion world, Jean Paul Gaultier, is to design the entire tour wardrobe for the pint sized popstar who begins her tour in Paris in May. She will end the tour at London's O2 arena in August.

It seems Kylie has not lost her love for the French following her tumultuous relationship with Olivier Martinez, as she has also appointed French photographers Pierre & Gilles to shoot the pictures for her programme and promo material. Kylie also has plans to take over America with her album launch in April. Busy old year for Kylie!
Source