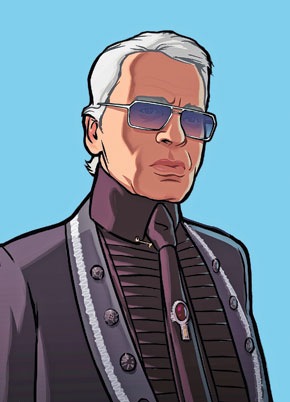 This is definitely the most bizarre piece of news I've heard for a while. Fashion legend Karl Lagerfeld is to star in the latest installment of Grand Theft Auto due out at the end of the month. The designer was introduced to people at Rockstar Games by his friend, Daphne Guinness and it was friendship at first sight!

The Kaiser explained that he wanted to get involved because, "They are the games of our times. Those games in a way changed the world." As participants cruise through the game's Liberty City you will be able to hear him being politically incorrect on the radio as he DJs on air at the game's K109 The Studio station. Lagerfeld added, "I loved it, [particularly] in a time when everybody wants to be so politically correct when they talk." He also told WWD that he's definitely down with the kids, "I'm very much 'au courant' and know what's going on." Might even be worth playing!
Source