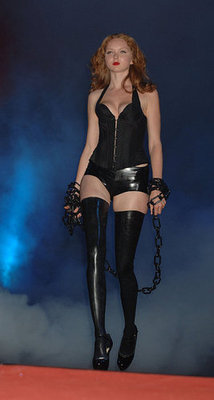 People are often left divided by Lily Cole but I really like her and think she photographs beautifully. Interesting news then that she has been revealed as the November coverstar of French Playboy.

The British model has already appeared on the catwalk for Agent Provocateur (pictured) but is clearly stepping up her game as she prepares to bare all for the French publication.

The magazine is very sophisticated and elegant so will no doubt reveal Lily in an artistic manner rather than in a trashy way. French style icon Lou Doillon has already appeared in the magazine.

We're very intrigued to see the pictures, I bet Jude is too...