Unless you've been hiding under a rock recently you'll be aware that Obama fever has hit England as America's first couple flew in for the G20 summit. World leaders are meeting in the British capital to discuss the world economy, but we're more interested in Michelle Obama's wardrobe! Her style has already made a big impact stateside and now we're getting a slice of the action. 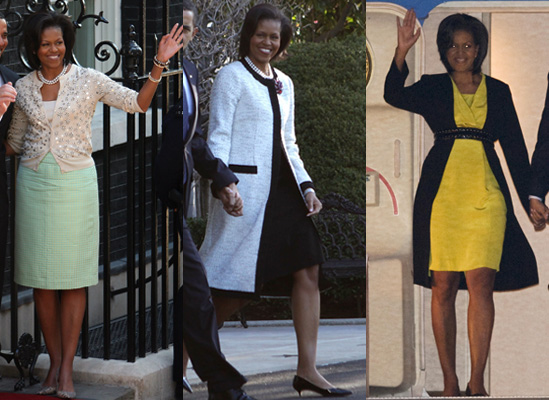 When boarding the plane in Washington she wore a chic monochrome Thakoon ensemble. She didn't miss the opportunity to rock another look though changing on the plane in to a brightly coloured Jason Wu dress. Wu commented on his design, “Yellow is such a great color, and it’s nice that we are seeing spring right now. It’s definitely very optimistic." He added, "It’s so assuring that even on European ground, she is wearing American designers." This morning Michelle headed to 10 Downing Street in a very elegant applique cardigan and pearls. Welcome to the UK!