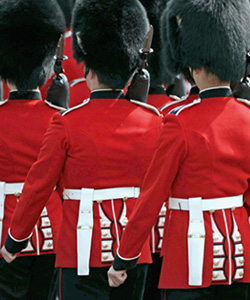 The UK is well known for being concerned by animal welfare and for having a high amount of vegetarians. Why then do the world famous Queens guards still wear unethical bearskin hats? People for the Ethical Treatment of Animals (PETA) have made fresh calls for an ethical alternative to bearskin to be used for the 18inch high headwear. They have asked Stella McCartney and Vivienne Westwood to get to work at creating an alternative design.

The Ministry of Defence have already tried using faux-fur but did not find it effective because the material has not been durable or weatherproof enough. The European director of PETA Robbie Le Blanc defended the plans for a new design stating that it could still become iconic. He told the BBC, "Most people think it's fake fur and when they find out it's real and it takes one bear to make a hat, they are appalled."

Even Ricky Gervais is getting in on the campaign. He recently wrote to Gordon Brown explaining that the use of the fur is unexcusable. He wrote, "I understand and appreciate the importance of uniforms, but continuing to use real fur in the 21st century is inexcusable, regardless of 'tradition'. The public are relying on you to bring about a humane changing of the guards."

Do you think that the design should be changed? Or do you agree that it's tradition for the guards to wear bearskin?
Source