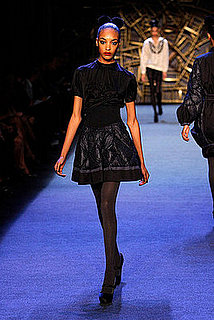 This maybe the first time you've heard the name Jourdan Dunn but I'm confident it won't be the last. The West London based model appeared on a staggering 75 catwalks during spring/summer 2008 Fashion Week, including Prada, Zac Posen, and Valentino. She also spoke out about the high number of white women appearing on the catwalk stating, 'London's not a white city. So why should our catwalks be so white?'

Today, however, she wants to dispell the rumours about her shopping at Primark!


"Everybody says I was spotted shopping in Primark. I wasn't shopping. I was with my friend: she wanted to go in, I wanted to go home - and we were just mucking about in the sunglasses section."

To find out more about Dunn read more
Sarah Doukas MD of Storm, the agency which signed Dunn explains her impact on the fashion industry.


"When she went to Paris Fashion Week after the Prada show she got standing ovations from the big fashion houses. Jourdan's also rather wonderful - she's strong-minded and funny. She has us in stitches."

Dunn was the first black model to appear at Prada since Naomi Campbell in 1997. I think it's great news to have another British face on the catwalk regardless of race and especially someone as refreshing and determined as Dunn. What do you think?
Source