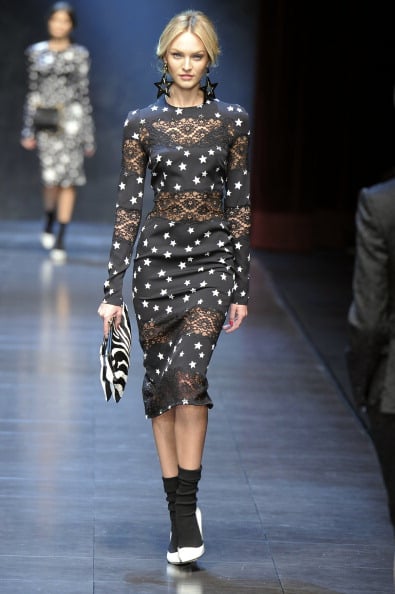 Boy meets girl at an '80s party, and by the end of the night they're sharing clothes. That seemed to be the idea at Dolce & Gabbana, who sent out a whopping 81 looks that alternated between oversized menswear and sexy dresses, a look that also carried over into the makeup. The menswear, wrought of either wool or jacquard, had a boxy silhouette a la David Byrne in his Talking Heads days. The dresses were classic Dolce sexy, many with lace, star prints, or both. At first the gender distinction was strong, but at the end of the show, sequin leggings began popping up under blazers and dresses were paired with men's oxfords. The bold colors and patterns gave the whole show an '80s pop princess vibe with a big dose of dandy.

celebrity style
Can Fashion Brands Actually Be Cancelled?
by Sarah Wasilak 2 weeks ago