You might have noticed an increased amount of fur on the catwalks last month as designers attempt to break fashion's biggest taboo. Well, it seems its appearance might not be as innocent as you think as an investigation by The Times discovered that some designers are being funded by major fur companies. Danish fur giants Saga Fur and Kopenhagen fur are involved in this scheme to encourage use of the animal fabric in catwalk collections in return for thousands of pounds of sponsorship. One designer, who wishes to remain nameless, commented, “No one appreciates just how tough it is right now. If you were offered free fur which looks glamorous and expensive and you were assured it was ethically farmed then why wouldn’t you go ahead and stick it in your show?” 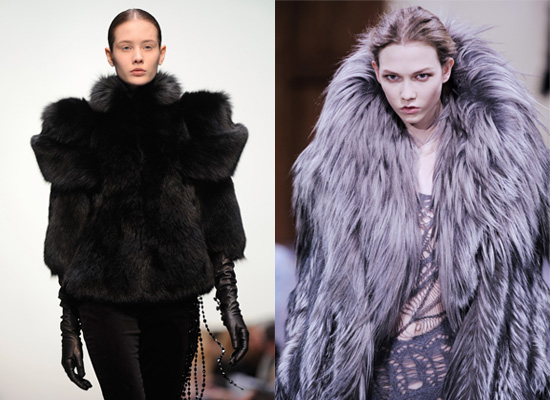 To hear more about the use of fur, just read more.

London is usually the fashion capital which avoids using the material due to negative press and strong campaigns by groups like PETA, but this season some brands decided to venture out of their comfort zone. Todd Lynn who is Canadian but based in London used free fur from Saga furs and argued,


“I can understand the ethical side of it, you do hear horror stories but I was working with Saga and all their products are ‘origin assured’, they are ethically produced. It’s like a sponsorship deal. They provide the products and the expertise to make it so I can have it on the catwalk.”


“Most people in this country recognise that the fur industry is totally cruel and want nothing to do with it. It is a violent, bloody industry. There is no nice way to rip the fur off an animal’s back.”

It's understandable that during these difficult financial times upcoming designers would seek funding from elsewhere, but do you think that fur is the answer? This news comes just a few weeks after Stella McCartney spoke at a Peta press conference arguing against the use of the fabric.