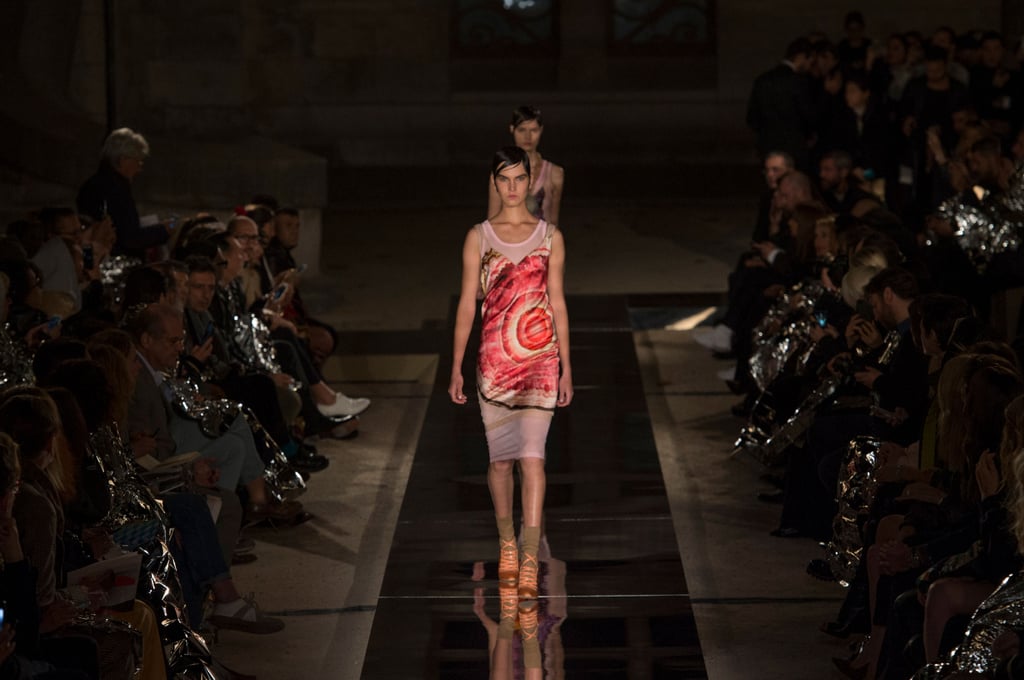 It was a cold night in Paris, Kim Kardashian was on her way in white lingerie, and guests (including Courtney Love and a loved-up Gigi Hadid and Zayn Malik) were seated outside the National Museum of Natural History, keeping warm in metallic space blankets. Naturally, the Givenchy show was about to start. Dimly lit lanterns provided a makeshift ceiling over the mirrored runway, which eventually shook to life as models like Joan Smalls and — who else? — Kendall Jenner made their way down.

Geode minidresses gave way to flared pantsuits, also accessorised with mineral rock pendants and oversize pockets that swung on each side. But lest you thought we were headed in a sexy direction, designer Riccardo Tisci offered a brief palette cleanser, a row of neutral, skin-complementing shifts, then switched gears. Mixed-print dresses, plenty with polka-dots or stripes, were complete with sharp, Seuss-like collars. The look was '60s mod, the colours ranged from rosy red to deep plum and dusty brown. Accessories followed suit. From a mesh tote with an inner sleeve to a leather bag that looked to be covered in candy buttons, the new Givenchy bag is equally a luxury item and a toy.

Models pulled ankle length socks up from under patent crisscross heels, an extra retro kick. Finally, after two fringed turtleneck dresses and more psychedelic prints, Tisci's last looks were unveiled. One might expect gowns fit for celeb loyalists like Amanda Seyfried, Julia Roberts, and Julianne Moore. But instead, jewel-embellished crop tops and blazer dresses over trousers rounded out the Spring collection. For someone who appreciates the sex appeal of a lady in a trouser, these will be far more magical on the red carpet.