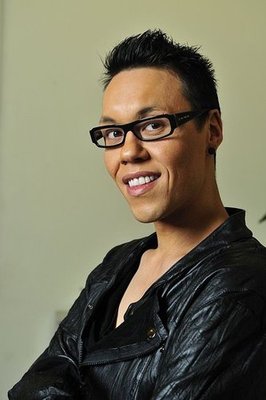 Last night Gok Wan hosted the Specsavers Spectacle Wearer of the Year Awards at the Waldorf Hilton Hotel in London and I was lucky enough to be invited along. The awards were presented by Ben Shephard and Jenni Falconer as they awarded the best spectacle wearer in Europe and the best celebrity wearers.

The evening (which included a celebrity auction) raised money for children's charity Kidscape which helps children in the UK who are effected by bullying. Before the event I was fortunate enough to catch up with Gok and talk about plans for the evening and his choice of glasses.

So, you're hosting the Spectacle Wearer of the Year Awards tonight.
I certainly am yes absolutely. My third year running so it’s all very good, it’s all very fancy. I am looking forward to it. It’s a really good party and theres free alcohol which always helps! It’s an amazing charity tonight as well so I’m very excited about it.

We’ve got quite a good line up as well. We’ve got some good people. We’ve got Jenny Éclair who is brilliant and very funny. I love her to pieces. Got a very old friend of mine Melanie Blatt from All Saints as well and if you’ve never met (Christopher) Biggins you’ve never lived. It’s going to be a good night.

To find out why Gok loves Biggins and how many pairs of glasses he currently owns just read more.

Why is Biggins so exciting?
Have you never met him? He’s a legend! The man is walking pantomime. He’s brilliant.

Do you have any plans to bring out your own line of glasses?
Yes I do. I want to do a line with Specsavers, I want to do a Gok range. We were going to do it this year but I’ve been too busy so maybe next year, we’ll see. I’ll only do it if I’ve got time to invest in it.

It definitely seems cooler to wear glasses now. Why do you think this is?
I think Hedi from Dior was responsible for it and what he did is he created a brand new look which was geek chic and he made it fashionable to look geeky. And I think glasses have always been associated with the geek look so now it’s en Vogue so it’s definitely happened because of that.

How many pairs do you currently own?
160 (says it like a darts announcer). Quite a lot. Well I’m very lucky because Specsavers give me most of them.

How do you decide what you’re going to wear?
Well I know that I need to look a little bit dressy but at the same time I need put the Gok twist on there. 12 years of working as a fashion stylist tells me what to wear.

Do you ever slob out?
Yes. All the time. Constantly! As soon as I get home I put my pyjamas on or my boy tracksuit and I do love my Ugg boots. I know that everybody hates them but they’re so comfortable that I don’t care.

Sustainability
KLEKT: The Sneaker Resale App That’s Not Just For Sneakerheads
by Navi Ahluwalia 41 minutes ago