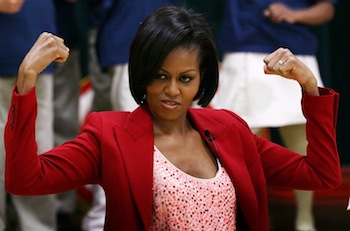 Seasoned fashion journalist Kate Betts already gave us a preview of her new book Everyday Icon: Michelle Obama and the Power of Style, by selecting eight iconic Michelle Obama outfits and telling us why they matter. After speeding through the book — a definite must read of February — I asked Kate a few questions about how our current first lady combines style and substance. Read our conversation below:

TrèsSugar: In the book you discuss how Michelle Obama's stylish example has impacted young women, especially those who are African American. How does Michelle show style and fashion can empower women, considering we hear about how the fashion industry can have a negative impact on a young woman's self-image?

Kate Betts: For young African American women, she's obviously an amazing role model. She's probably the first style icon that they've known in their lifetime that's not in the entertainment or sports business. That's a powerful thing. She got where nobody thought she could with her intellectual power, and she used her style to carry her on this amazing trajectory. And what I think she's trying to show, without talking about it, is how feeling good about yourself, dressing well, taking care of yourself can empower you. And I think she's speaking directly to young African Americans who strive to emulate her. But I think it's a message for all women.

In Michelle's case, she traveled through unfamiliar territories like Princeton or corporate law firms, and I think her style was totemic for her. It was part of herself that she was holding onto. In those foreign environments it's easy to feel pressure to fit in and to become something else, and I think the White House is the biggest example of that. The pressure to dress for the job and "become" the first lady is intense. But she often says, I'm a better first lady when I'm Michelle Obama than when I'm "The First Lady of the United States."

TS: How come Michelle Obama's "be yourself" message comes off as more authentic than when it's written in women's magazines?

KB: We see Michelle as this authentic person. It feels like her public persona is her private self also. So we really believe her and have faith in her. It's easier than with a magazine that may seem inauthentic because they use models or because there's somehow commerce behind it.

TS: How much of Michelle Obama's regular mom, J.Crew-wearing style is calculated for political reasons? Get the answer, as well as a peek into Michelle's stylish college days, after the jump!

KB: I think image is calculated no matter what. She is very authentic in terms of what she does and does not want to do, but for example during the campaign, as she was being cast as the "angry black woman," I think she made a calculated decision to change her image and take off the power suits and the boardroom attire and embrace this mom-in-chief idea.

TS: You mention that other cultures, like in France, consider style a substantive pursuit. Can Michelle Obama influence Americans to become less ambivalent about style?

KB: Michelle has shown women in the workplace that it's OK to be feminine and to embrace fashion and have fun with it. For so long working women, especially powerful women, have thought they've had to dress like men in order to succeed. And it's not just about dressing like men or in boring pantsuits, but women have been dressing to fit in, and that's true in Washington DC and Capitol Hill. Michelle is making bold statements about standing out instead of fitting in, and I think she's giving women confidence to do that.

TS: A lot of Michelle Obama's public image is about her fashion sense, but she doesn't seem to talk about it. How come?

KB: To talk about it would be to diminish the power of it. To say "this is a red dress and I like it because of the neckline . . ." that makes it pedestrian immediately. She's probably letting the image and the clothes speak for itself. That is the power of style.

TS: You say Michelle takes cues from both Jackie Kennedy and Hillary Clinton. Could you see her following a similar path as Hillary after she's finished being first lady?

TS: When researching Michelle's background did anything surprise you?

KB: I was surprised by the women at Princeton I interviewed who were friends with her. They were aspiring designers at the time. To all of the naysayers who say, "Oh Michelle Obama doesn't really have style; she just got a stylist when she got to the White House," these women definitely disproved that notion. They said she had the same style, the same classical taste, and confidence, and presence that she has now. And that she modeled in the student runway shows they put on is a testament that she was interested in fashion.

TS: You say Michelle molds style and substance together. Do you think that reflects most modern women today?

KB: I'm in New York, so I think of a lot of women here who are very stylish and substantive — maybe we just think of them as style icons like Diane von Furstenberg, or Diane Sawyer, or Amanda Burden. They're doing amazing things and have great style.