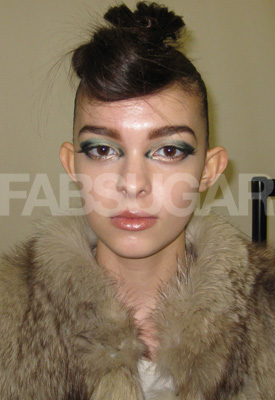 Whilst BellaSugar UK got the scoop on the beauty looks at William Tempest, I had a quick chat with one of the models from the show – Siobhan Perry. The 18 year old model was doing her final show of her first ever fashion week having also appeared at Charles Anastace amongst others. Siobhan hails from Liverpool and got her big break when she represented the UK at the 2009 Ford Supermodel of the World.

She was first scouted at just 15 and has since been snapped up by Premier Models. She has already worked with Reebok, Rare at Topshop and has appeared in You magazine.

Which designers would you like to work with? I always wanted to model for Alexander McQueen, but obviously I can't do that now. I was really sad when he died. Some of my other favourite designers include Stella McCartney, Alexander Wang and William Tempest.

What would be your dream fashion shoot? Working in Asia with an elephant!

Which magazines would you like to appear in? My dream is to appear on the cover of Vogue. I'd also love to work with Dazed and Confused and i-D.