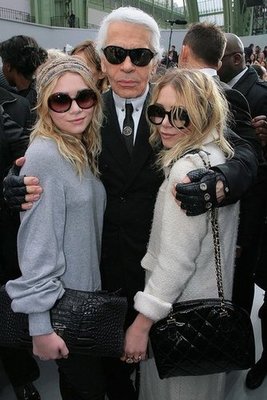 Earlier this year I reported that the stylish Olsen twins were to release a book about the various influences upon their lives (and most of you wanted to hear about them). Although the book isn't due for release here for another month, small snippets from their interview with Karl Lagerfeld have been revealed.

Their conversation with the Kaiser came round to road safety which revealed hints as to why Karl recently took part in a road safety campaign. Karl explains, "I had two accidents where I fell asleep — after that I thought it was better that I don't drive. I'll get a driver. I'm a bad driver because I want to look there, there, and up there. I get bored easily — so twice I fall asleep and twice the car is destroyed … I had nothing [wrong] with me — but both cars were destroyed."

The twins held nothing back in their interview and even asked Karl how he still stays in shape after his crash diet several years ago. "Nothing … I have a doctor who I made a book with that sold five million copies all over the world...Since I started my diet, which was like eight years ago, I haven't touched what I'm not supposed to: sugar, cheese, nothing! I don't even look at it. It looks to me like plastic."

Influence is due for release in the UK on 27th November (£20).
Source