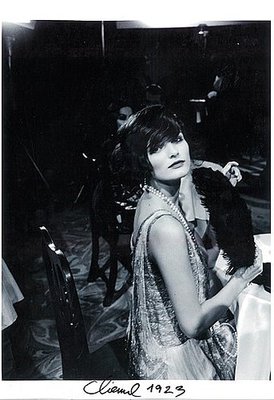 This week another film about Coco Chanel will be released but this time from the heart of Chanel itself. Creative director Karl Lagerfeld has created a silent movie about Coco starring model Edita Vilkeviciute as the young designer.

It will be screened on Wednesday night, along with a showing of Chanel’s Paris-Moscow pre fall ready-to-wear collection. Karl told WWD, “Today, people are ready for silent movies again, as they spend time — hours, I would say — looking at text messages and e-mails. I always loved silent movies.”

As Karl is very protective of the clothes he didn't want just anybody starring in the movie. Instead he chose from his close entourage including Brad Koenig and his bodyguard/private secretary Sébastien Jondeau. The actual workers from Chanel atelier star in the movie as Karl doesn't trust extras ("I cannot take extras. They don’t know how to touch the clothes.")

It took two days to make the mini movie and judging by the images released today it's going to be very artistic.