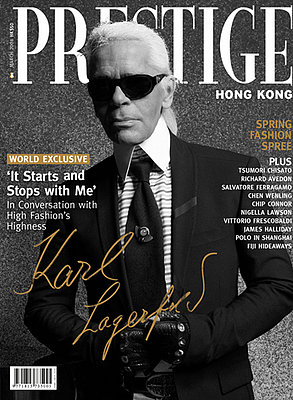 Creative Director of Chanel Karl Lagerfeld is infamously mysterious rarely speaking out about his own life. However, this month he granted an interview to Prestige magazine where he talked openly about fashion, the industry and love.

Having seen the Lagerfeld Confidential movie, I can't help feeling that he is constantly misinterpreted by the press, which is why this is a refreshing write-up as it's a straight forward Q&A. Lagerfeld is obsessed with the idea of living in the present, it's never been obvious why although you could speculate that he is not comfortable with the past. Either way, he argues that what is important is the the here and now and he explains,


"If I started to care about what I did, I would not be able to continue. I like to destroy things, houses, everything, only to rebuild. But what’s funny is to rebuild and to do, not what you have done."

To find out about Lagerfeld's size zero views read more

One of the most endearing aspects of Lagerfeld to me is his harsh honesty. For example, in the movie he states that he's so arrogant that he doesn't think he is! In this interview another example is,


You know I never analyse. I’m too superficial to do that.

Unfortunately this interview is becoming famous for Lagerfeld's views on size zero models. However, I must confess that I agree with his view point. He is in no way condoning eating disorders but more pointing out the flaws in the constant media obsession with size zero.


"But this is a subject I won’t discuss. You know why? In France, there are a large percentage of young girls who are overweight and less than one percent are skinny."

Obesity is an issue that is discussed in a different way to anorexia, for some reason people are quick to point the finger at people for being too slim but not for being too overweight. Obesity is as big a health risk as anorexia so Lagerfeld's comment may sound harsh but it is factual. Do you think that he is harsh or honest?
You can read the full interview here