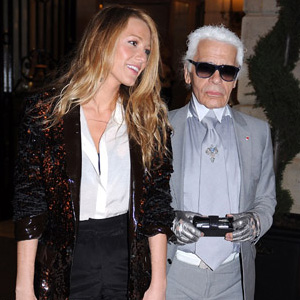 The rumour mill is working over time today about a certain possible cameo appearance in Gossip Girl. The cast have been filming in Paris recently gaining much media attention!

The stars of the show, Leighton Meester and Blake Lively, have been spotted in a range of chic ensembles, but what could be more chic than being spotted out with Karl Lagerfeld? Blake was spotted taking part in a photoshoot for Vogue US at the Ritz alongside Mr. Lagerfeld, but did she manage to persuade him to appear in an episode?

I am so excited about this possibility that I've already started imagining how he might fit in to the storyline. Would you like to see Karl appear in an episode of Gossip Girl?