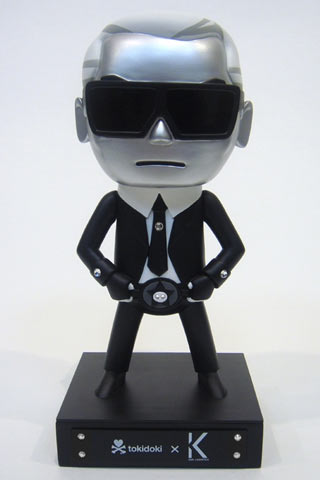 Karl Lagerfeld has been immortalised in many ways and this week has been honoured with his own Tokidoki figurine. The Japanese-inspired brand have created a 25cm high limited edition version of the designer.

Karl commented, "I am very flattered that I became a Tokidoki. I always loved them and I am very happy to be one of them."

The figurine has been dressed in K Karl Lagerfeld and embellished with rhinestones. It's available at Parisian boutique Colette (€129/£118) and was created by Simone Legno. Mini Karl will also feature on a limited number of t-shirts. The designer caused controversy earlier this week with comments on curvy models.