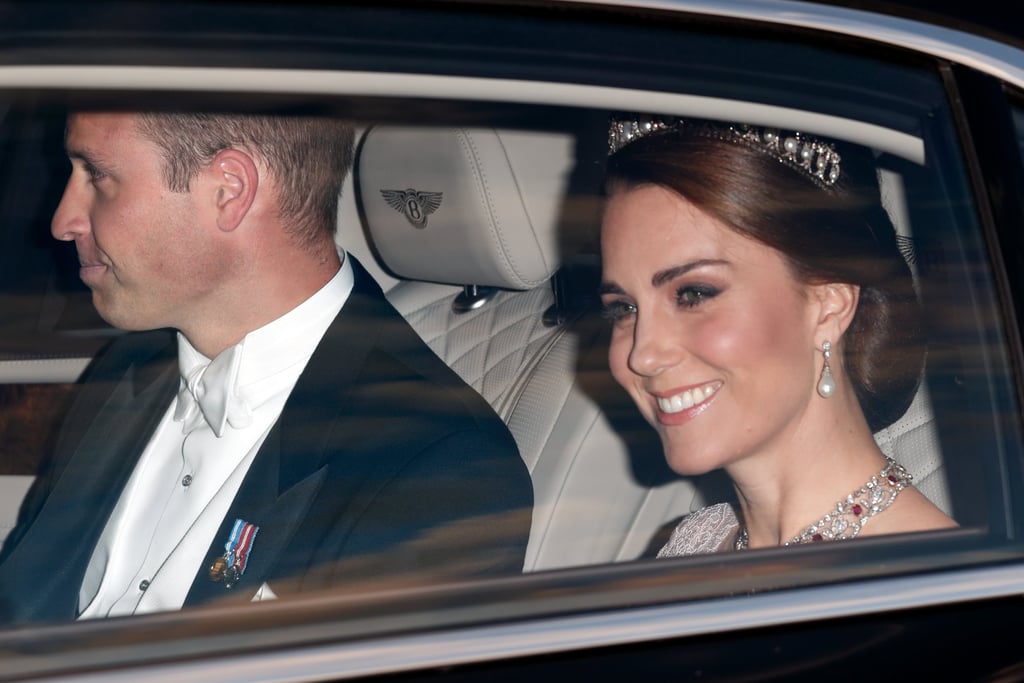 The Duchess of Cambridge has dipped into the queen's jewellery box again for Wednesday night's state banquet in honour of King Felipe and Queen Letitzia of Spain, and she has chosen a piece that hasn't been seen in public for decades. Kate once more called upon the services of the Cambridge Lover's Knot Tiara, which she has worn for the past two Christmas diplomatic receptions at Buckingham Palace, plus her favourite diamond and pearl earrings – but she has also borrowed the Queen Elizabeth Bandeau Necklace for the first time.

The lavish diamond and ruby necklace was bought from the jeweller Boucheron in 1907 by society figure Lady Greville, who left it to her friend the Queen Mother upon her passing in 1942. It was given to the then Princess Elizabeth as a wedding present from her parents five years later and displayed in pride of place amongst her many wedding gifts. Featuring intricate diamond flowers and single rubies, it forms a deep V-shape and ends with a single suspended diamond and was the perfect complement to her pretty pink Marchesa gown. The 21 year-old Princess Elizabeth had the necklace shortened, and she wore it many times as a younger woman — most notably to the Royal Variety Performance in 1962, the State Opening of Parliament in 1965, a state banquet thrown by the Dutch Royal Family in 1982, and to an opera gala during a state visit to Sweden in 1983.

The necklace hasn't been worn in public for 34 years, so this is an exciting moment for jewellery watchers!